Raising Glutathione:
what does it mean exactly? 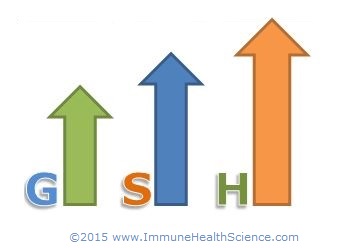 Understanding what raising glutathione actually means is very important and will help you approach the multitude of options, currently available to you, with additional knowledge.

Glutathione does not behave like many other substances we are so used to, such as vitamins or flavonoid antioxidants, for example.

First of all, it is because your body produces glutathione intracellularly on its own; secondly, contrary to the common belief, when it comes to glutathione, more of it (circulating in the bloodstream) does not necessarily mean better, and raising glutathione does not mean optimizing it. I will explain why.

As you may already know, glutathione is produced only intracellularly, out of three amino acid precursors: glutamate, glycine and cysteine.

The first reaction to happen is the joining of glutamate and cysteine by the enzyme glutamate-cysteine ligase or GCL (formerly known as gamma-glutamyl-cysteine synthetase) to form gamma-glutamylcysteine.

The activity of this enzyme, and thus the glutathione synthesis, can be arrested by glutathione itself in the process called feedback inhibition of GCL. The cell “sees” that the circulating glutathione levels are too high, that is when the ratio of active to oxidized glutathione (GSH/GSSG ratio) in the bloodstream is too high too, indicative of very low oxidative stress. High GSH/GSSG ratio is, of course, very desirable to keep the redox status balanced, to protect the extracellular environment and the red and white blood cells.

Liver is the organ with the highest concentration of glutathione, with the most rapid turnover of glutathione, and the only organ that exports most of its glutathione into plasma and bile. Export also occurs only when extracellular redox balance needs to be maintained, or if there is an increased need for cysteine somewhere (either to make glutathione, or proteins, or amino acid taurine, or to donate sulfur).

Liver cells have the enzyme gamma-glutamyl-transpeptidase (GGT) on their surface that breaks down exported glutathione in the cycle called gamma-glutamyl cycle, releasing cysteine that can be re-absorbed and used for new GSH synthesis both in the liver and in many other organs and tissues of the body where it is carried off to.

It is not clear how much extracellular glutathione GGT can handle. Any extra free glutathione circulating in the bloodstream, not processed by GGT, will oxidize quickly to GSSG throwing the GSH/GSSG ratio off balance if the export of active GSH from the cells does not catch up, and it may not, if GCL is not activated like it should be. Dysregulation of natural intracellular glutathione synthesis in the liver would eventually have an impact on glutathione levels throughout the body.

Intracellular processes that may get affected by suppressed GCL are detoxification of pathogens and toxic compounds, protection of nutrients entering the cell, and most importantly proper gene expression, protection of DNA, and the energy-producing mitochondria from toxins and oxidative damage.

Another crucial endogenous (produced by the body) antioxidant that depends on certain levels of oxidative stress to activate its production is superoxide dismutase (SOD) that neutralizes highly reactive superoxide oxidants, and thus protects glutathione levels from depletion.

That said, raising glutathione should be oriented towards optimizing intracellular production in line with the way these extremely complex and intertwined processes were designed to function, working with the body, rather than focusing solely on flooding the bloodstream with free glutathione which may upset the checks and balances of the natural glutathione production.

As we age and lose the ability to produce glutathione in sufficient quantities to counteract the accumulation of threats, optimizing glutathione would ideally include:

Armed with the building blocks, cofactors and other important enzyme stimulating nutrients, each cell will produce its own glutathione as it was designed to, as much as the cell needs, and at a pace tailored to its specific needs.

This feedback inhibition phenomenon actually makes a lot of sense. Imagine if a group of cells or even one particular organ decided to produce a thousand times more glutathione than it needs. The limited amino acid, vitamin and nutrient resources will run out leaving other cells and organs in grave danger of malnutrition and glutathione depletion.

Return to Top of Raising Glutathione
Return to Home