Glaucoma diagnosis
and the role of glutathione

In addition to dealing with the advanced peripheral neuropathy (read the article here) a glaucoma diagnosis was given to Ray in 2006. This glaucoma
diagnosis came as a big surprise since no one in his family had ever had it and he had no symptoms whatsoever.

How did Ray’s glaucoma get discovered? One day a co-worker sat on Ray’s desk and crushed his glasses. Ray went to a local Walmart to order a new pair. As part of a standard eye exam an optician measured his eye pressure and suggested Ray saw an ophthalmologist for further evaluation because his eye pressures were elevated. Thank goodness that co-worker sat on Ray’s glasses because, unfortunately, this initial glaucoma diagnosis was confirmed (type - open angle glaucoma).

At that time Ray’s eye pressures were at 25-26 mmHG with very mild constriction of the optic nerves detected. The normal pressure is considered to be 12-20 mmHG (millimeters of mercury – units of the pressure measurement).

Glaucoma diagnosis is indeed a serious one - this eye disease is characterized by elevated fluid pressure in the eye which, if left untreated, restricts the blood flow within the eye and leads to optical nerve damage. The result of these processes is eventual loss of vision.

In its early stages this eye disease is often asymptomatic. Glaucoma diagnosis may come only after a person starts feeling discomfort – pain in the eyes as if constant pressure is being applied, frequent eye fatigue, or worse – gradual loss of vision starting with peripheral vision.

If left untreated glaucoma may lead to blindness within 5 years. It is possible to prevent such a grave outcome with therapy that includes daily use of eye drops and/or laser surgery or conventional surgery. However, it is impossible to reverse damage to the optic nerves once it occurs. That’s why it is very important to have eye pressure checked regularly, especially if risk factors are present.

Some risk factors for developing glaucoma:

Ray did not fall into any of the above risk categories. So, how come he got a glaucoma diagnosis?

The eye doctor could not answer this question. So, we had to do research on our own. While going through numerous abstracts of studies on glaucoma over the past 7 years we discovered the following abstracts indicating that low glutathione levels and oxidative stress lead to glaucoma onset and progression:

Also, glaucoma is classified as a neurodegenerative disorder or an optical neuropathy (4-Hydroxynonenal, a product of oxidative stress, leads to an antioxidant response in optic nerve astrocytes. Malone PE, Hernandez MR. Exp Eye Res. 2007 Mar;84(3):444-54. Epub 2006 Dec 13). In Ray’s case his glaucoma diagnosis is likely to have a certain connection with the deterioration of the peripheral nerves which at its onset was marked by low glutathione levels and resulting oxidative stress.

The above abstracts clearly indicate that glutathione levels play a critical role in the cellular defense against oxidative stress and that there is a strong connection between glaucoma and low glutathione levels.

Unregulated oxidative stress is induced by depletion of intracellular glutathione. The availability of glutathione affects the risk for glaucoma progression and the degree of damage to optical nerve.

For more information on glutathione and its crucial role as a powerful master antioxidant produced by your own body read here.

Since Ray has been on a glutathione raising protocol due to his peripheral neuropathy (read about it here), his glaucoma has not progressed either. For the past 8 years his ophthalmologist has not detected any progression of the disease, although Ray continues to use eye drops regularly and also uses some of the natural remedies for glaucoma.

Below are the pictures of Ray's eyes with no detectable damage as of June 2014: 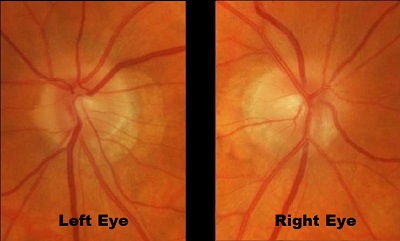 Return to Top of Glaucoma Diagnosis
Return to Home

[?]Subscribe To This Site
© 2008-2018 ImmuneHealthScience.com All rights reserved. READ OUR DISCLAIMER.