Is Honey Better Than Sugar?
(and how the sugars affect immune health) 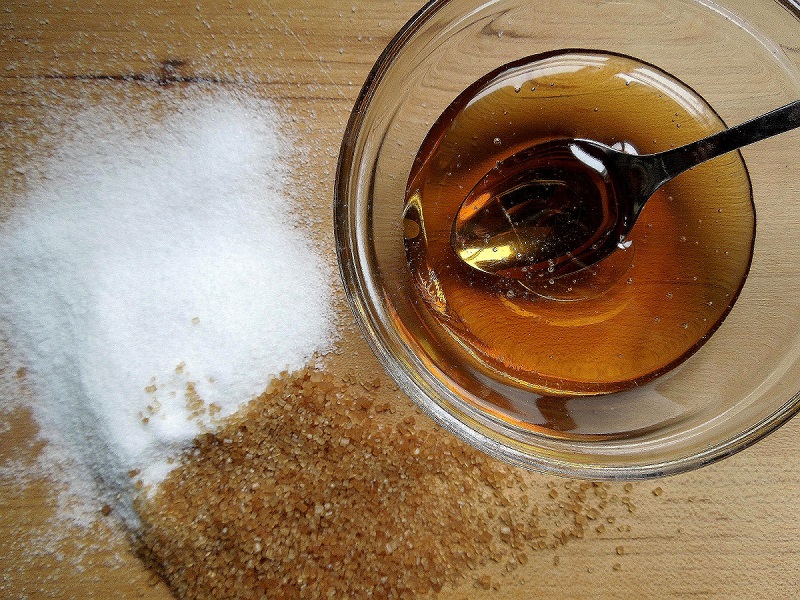 Is honey better than sugar? – the question many people ponder in the attempts to reduce the amounts of sugar in their diet which has been linked to type 2 diabetes, heart disease, obesity, metabolic syndrome, recurring yeast infections, and other health conditions.

This question can be answered with both a “yes” and a “no” depending on what aspect we are looking at: honey as an isolated sweetener or in a bigger picture - as a part of the diet that can impact immune health.

IS HONEY BETTER THAN SUGAR AS A SWEETENER?

First of all, let’s remind ourselves what basic forms of sugar, which is a simple carbohydrate, there are:

Monosaccharides, or simple sugars that serve as building blocks for compound sugars:

Disaccharides get digested into their component monosaccharides. There are also more complex, long-chain compound sugars such as polysaccharides and oligosaccharides, and others.

To answer our question whether honey is better than sugar as a sweetener, let’s take a look at the sugar composition of honey. Although there are many types of honey depending on what flowers bees feed on, the average composition of floral honey is following (according to Honey Composition and Properties by J.W. White Jr. and L.W. Doner. Beekeeping In The United States. Agriculture Handbook # 335 from 1980):

This composition tells us that honey is a highly concentrated water solution of approximately 40% fructose and 40% glucose (maltose and sucrose contribute these two simple sugars to the total). Some high density honeys with much lower water content have higher percentages of sugars. Thus, in terms of its simple sugars content honey is almost equivalent to table sugar (sucrose) which is 50/50 glucose/fructose.

At the same time, since raw, unfiltered and unheated honey contains enzymes, traces of minerals and B-vitamins, and antibacterial and antioxidant components, it is a better sweetener choice to add to teas, oatmeal, or plain yogurt, for example.

Honey’s glycemic index (GI) is 50 compared to 65 of table sugar. It means that honey causes a somewhat slower spike in blood glucose than plain sugar and requires less insulin to be metabolized.

Some natural sweeteners comparable to raw, unfiltered honey are:

In their unprocessed state these alternative sweeteners contain traces of vitamins, minerals and antioxidant compounds, and have lower glycemic indices than refined white sugar (except brown sugar). 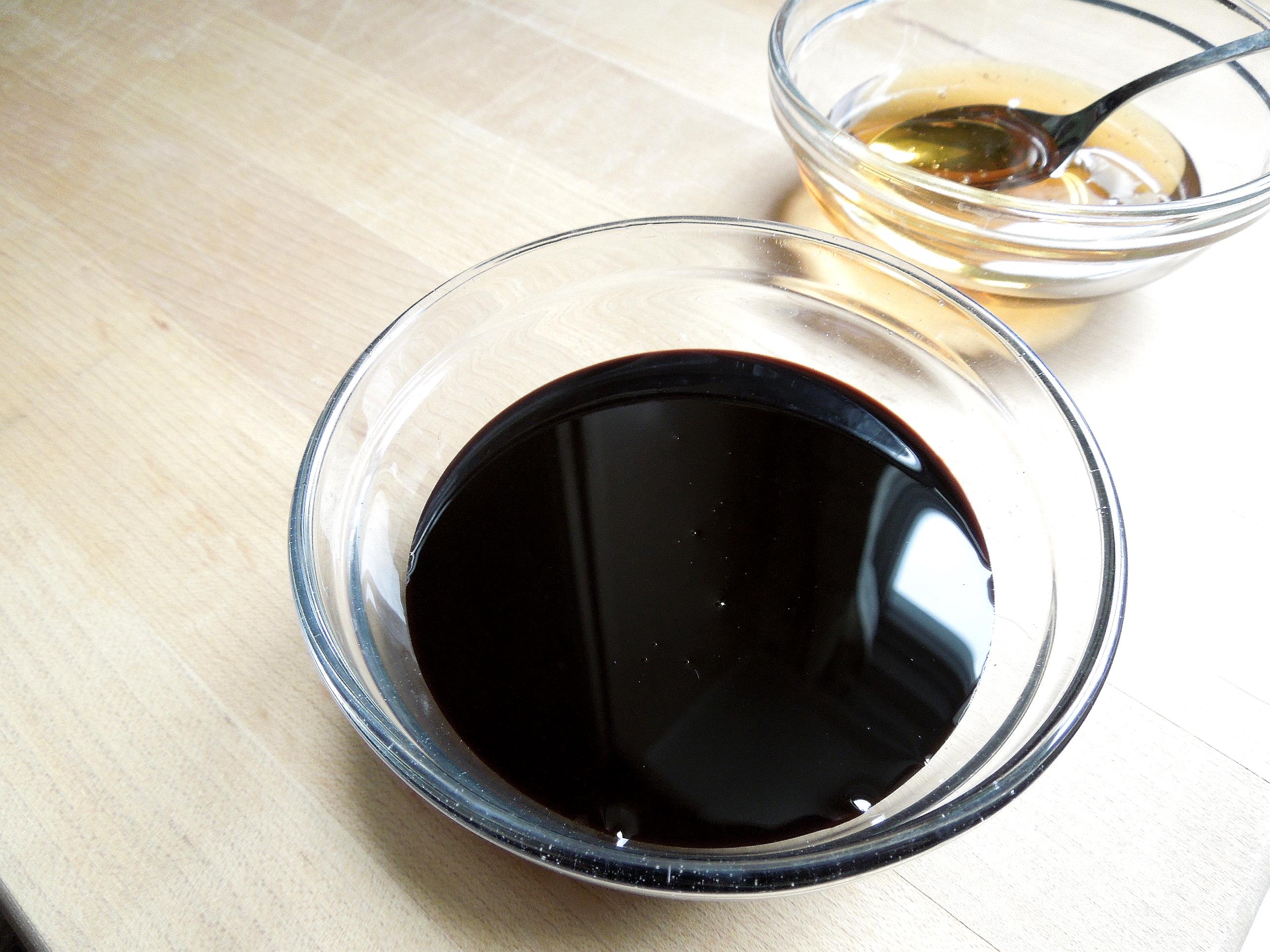 The researchers concluded that based on the average consumption of 130 g of refined sugar a day, substituting alternative sweeteners could increase antioxidant intake similar to the amount found in one serving of berries or nuts. (Total antioxidant content of alternatives to refined sugar. Phillips KM et al. J Am Diet Assoc. 2009 Jan;109(1):64-71). Of course this conclusion does not mean that high sweetener consumption is an ideal source of antioxidants in one’s diet as you will see below.

Heating honey for long periods of time as, for example, in baking, reduces honey to being no better than refined table sugar. Honey sold in those cute bear shaped containers should be avoided because it is highly processed and there is no guarantee that it comes from bees that fed on flower nectar and not on sugar water or HFCS.

Bottom line: as a sweetener for certain dishes and drinks, honey is better than sugar (sucrose), but only if it is raw, unfiltered and unpasteurized.

IS HONEY BETTER THAN SUGAR FOR IMMUNE HEALTH?

The harmful effect of sugar on immune health was demonstrated in a study that produced an astounding result - the phagocytic activity of neutrophils (type of white blood cells that engulf and ingest bacteria, fungi and other pathogens; the process itself is called phagocytosis) dropped almost 50% in blood samples from human volunteers after consumption of 100-gram doses of various simple sugars: glucose, fructose, sucrose, honey and orange juice.

The greatest effect of suppressed neutrophil activity occurred between 1 and 2 hours after ingestion and some impact was still evident at 5 hours. Starch (complex carbohydrates) did not have such an effect on neutrophils. These results show that simple carbohydrates impaired the ability of neutrophils to engulf bacteria and thus reduced the body’s resistance to infection. In contrast, fasting for 36-60 hours showed greatly improved phagocytic activity of neutrophils. (Role of sugars in human neutrophilic phagocytosis. Sanchez A, Reeser JL, Lau HS, et al. Am J Clin Nutr. 1973 Nov; 26(11):1180-4).

Bottom line: when it comes to our immune health, honey is no better than sugar because it contributes to the total sugar intake and the impairment of immune response to various pathogens.

How difficult is it to reach the threshold of 75-100 grams of simple sugars to initiate the immune system suppression? It turns out not that difficult at all. Here are the tables of some common foods and drinks, and their sugar content per a conservative-size serving: 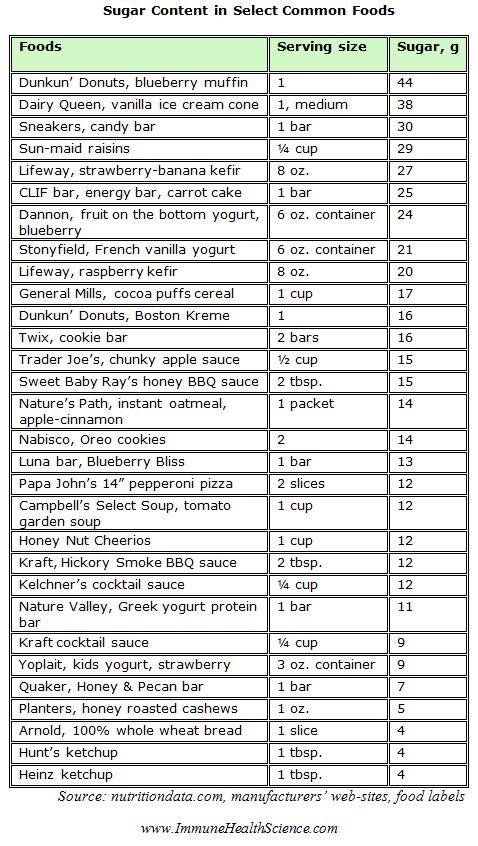 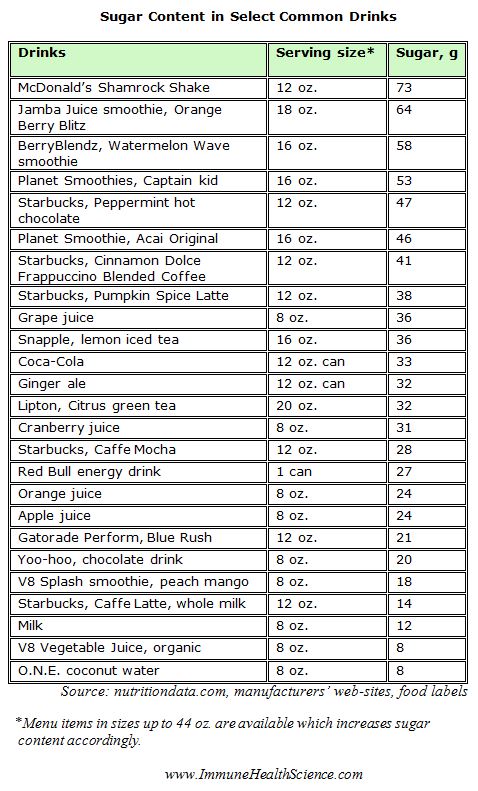 TIPS ON HOW TO REDUCE SUGAR IN YOUR DIET

The following changes help us control sugar in our diet and are a part of a glutathione boosting regimen for the management of Ray's peripheral neuropathy. Hopefully, you will find these tips helpful too as you move towards better immune health:

Return to Top of Is Honey Better Than Sugar?
Return to The List of Superfoods
Return to Home